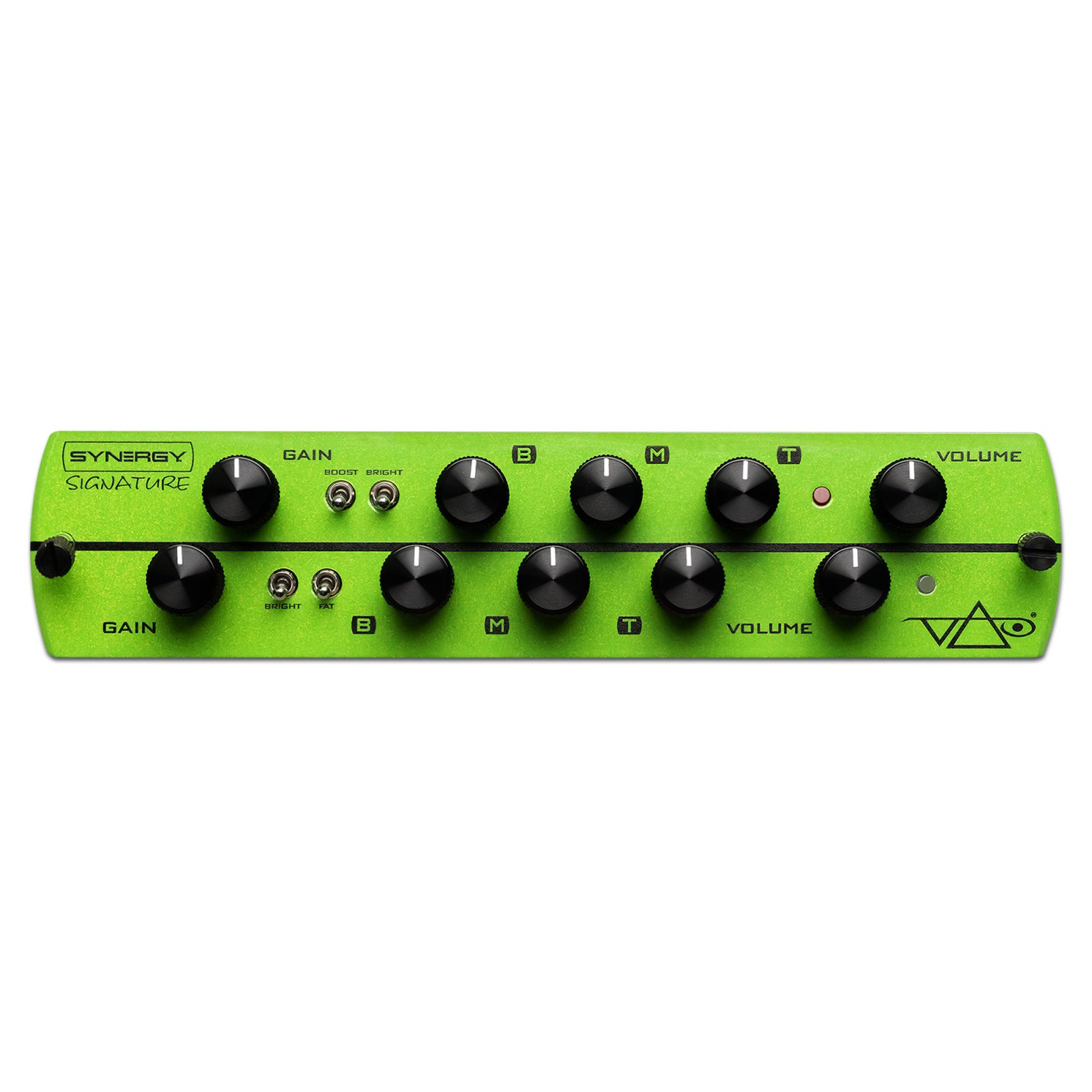 Steve Vai has become synonymous with tone, technique, and all aspects of the electric guitar with tenacious, creative energy that explodes through his music, performances, and especially his signature gear designs. When it came time for Steve to evaluate a new amplifier to endorse, he played them all and after months of consideration - he chose Synergy. The Synergy system allowed Steve to play an all tube system with the versatility of having pre-amps from Friedman, Soldano, Bogner, Diezel, ENGL, Morgan, Fryette, Metropoulos  etc. “Why play one great amp, when with Synergy I can play them all.”
The Steve Vai tube preamp is the first Synergy signature module. The “VAI” module is the outcome of months of designing, testing, and tweaking until Synergy met Steve’s exacting standards. The blue channel (bottom) delivers everything from sparkling cleans to slightly broken up American tones. The FAT and BRIGHT switches let you fine-tune your sound. The top red channel offers everything from the drop-tuned rage of “Bad Horsie” to the opulent harmonic sustain of “For the Love of God.”  And with mini toggle switches for BOOST and BRIGHT you’re sure to find your own signature tones.
With the Synergy VAI module, there’s never been an easier way to harness the sound of a Bonafide guitar legend.
The Synergy system offers you sought-after tones from legendary amp designers and artists such as Steve Vai, in all-tube designs that are perfect for the direct-recording, lower-stage-volume and compact-guitar-rig demands of today.  It’s one of the reasons, the Synergy preamp module system is taking the industry by storm.
Steve Vai Signature Preamp Module Features:
• Built in the U.S.A.
• All-tube preamp module custom-designed by Synergy and Steve Vai
• Two channels offer switching between clean and overdrive to distortion tones
• Channel Blue: Clean - Gain, Volume, 3-Band EQ, Fat & Bright Switches
• Channel Red: Overdrive - Gain, Volume, 3-Band EQ, Bright & Boost Switches
• 2 x 12AX7 preamp tubes ensure rich harmonic performance
• Easy to install and remove from Synergy preamp docks
• Dual/Single switch allows the module to be used with older Egnater and Randall hardware
• Three-position cathode select switch allows you to configure the input tube bias setting for optimum input gain and bass response.
CATHODE SELECT SWITCH:
The VAI module features a three-position switch on the PCB which allows you to configure the input tube bass response to match the original circuit of the selected module. This will affect the feel and tightness. Each amp designer has a specific combination of components that makes up their input tube circuit. We have selected the three most popular combinations which you can access with this switch. The USA voiced modules typically use setting 1 (1.5K resistor and 22uf capacitor). British style modules use position 2 (2.7K resistor and .68uf capacitor).
Like the SOLDANO module, the VAI module is set to position 3. Of course, you can experiment and try any of the positions to see what you prefer. The modules will come preset to the designers' preferred setting which for the VAI module is position 3 (1.8K resistor and 1uf capacitor).
DUAL<>SINGLE SLIDE SWITCH:
The VAI module features a secondary switch allowing the new Synergy modules to be used in older single channel Egnater and Randall modular amps/preamps that do not accept the dual channel modules. This allows access to either of the module channels when that slot is turned on. You will still not be able to switch between the two channels due to the limitations of the older hardware. You can set it so either module channel one or module channel two will turn on when the slot is selected. Set to Dual when using the module in units that have the switching circuit to access both modules. If you are using a single channel only amp/preamp, setting to DUAL will make the bottom module channel active. Set to Single will cause the top channel of the module to come on when selected.